Charlotte Street Foundation is excited to host Mirror Me Mirrored You, on Friday, July 19, 2019 at Capsule (located 1664 Broadway Blvd).

Mirror Me Mirrored You is an event featuring a duo of solo multimedia performances, The Understudy by Kansas City artist Julia Vering (Unicorns in the Snow), and For Retired Gymnast by Pittsburgh artist, Anna Azizzy. Vering will also screen a video featuring the green screen comedy videos she makes with the participants of Jeanne’s Place Dementia Activity Program, all of which have early stage dementia. Azizzy and Vering met each other when sharing a bill in Pittsburgh one year ago, and were struck by similarities in their approach to the use of video projections, personal narrative and the absurd.

Julia Vering‘s (aka Unicorns in the Snow) understudy is an evolving experimental multimedia performance piece by  that follows a narrator on a tour of different spaces through magical rocks, interactive projections of animated plastic canvas, and immersive video of corn fields and abandoned industrial structures of Kansas City. The piece features collaborations with adults with early stage dementia as narrators, dancers, and actors via duo video projections on two screens.

Vering, who currently facilitates bi-monthly video-based drama therapy sessions for Jeanne’s Place dementia activity program, will engage these participants in creating The Understudy Part III through improvisation, choreography, cue cards with fill-in-the-blanks, and life review techniques. The meta story that is created through this process is hoped to be a celebration of strengths of the participants, stretching Vering technically and participants cognitively. Vering hopes to engage both the audience and collaborators in meaning-making and to inspire further collaborations with individuals with disabilities.

For their performance, Anna Azizzy will be sharing two scenes from For Retired Gymnast, an absurd and hilarious multi-media performance depicting a fictional gymnastics team, their coach, and moms. The characters’ experiences exaggerate their own as a former gymnast and queer person. Anna reimagines their team’s stories, giving them secrets and exposing their most shameful (queer and unusual) desires. Set against a backdrop of gymnastics physician Larry Nassar’s abuse trial, the piece reveals the sublime and grotesque layers – only visible in hindsight – of their world.

All Ages friendly event at 1:30 PM

Second-showing at 8:30 PM (not all ages friendly) 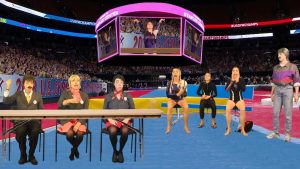 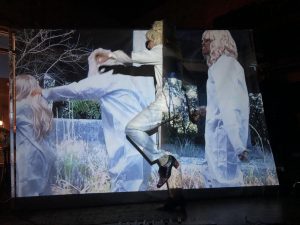 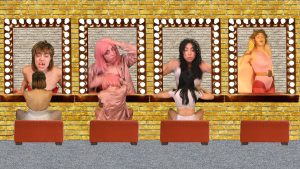 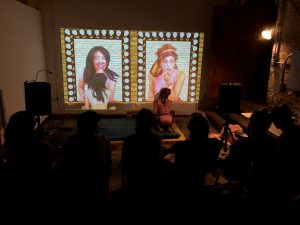 Anna is from Pittsburgh, PA, where they earned their BA in Experimental Theater and Sculptural Performance at Carnegie Mellon University. They have performed at the Andy Warhol Museum, the Carnegie Museum of Art, Monkey Town Mexico City, and the Via music festival, as well as a great number of beloved diy spaces in Pittsburgh and on tour across the east coast. Anna is a curator and hosts the Side Split Variety Show, a series where queer people try out new performances.

Julia Vering is a Kansas City-based performance artist, musician, animator and licensed clinical social worker. She earned a BA from the Evergreen State College studying electronic music, experimental animation and social work, and a Masters degree in Social Work from the University of Kansas. Vering’s projects include collaborations with residents of nursing homes, facilitating music recording workshops for incarcerated youth, an Andy Warhol funded Rocket Grant to produce a multimedia piece You Live Here Too and many other experimental multimedia works. Vering seeks to balance her client-centered social work with the need to create intensely personal introverted work to share with the public, reconciling her aptitude for listening to and fostering a sense of being understood in others with the longing to be understood herself. Since 2002, she has performed as Unicorns in the Snow at DIY spaces including basements, a shipping container in Brooklyn and a denim factory Richmond, Virginia. She currently works as a hospice social worker, and conducts bi-monthly experimental video-based drama therapy with individuals with early stage dementia. 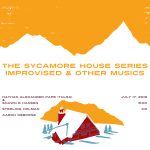