Spine Showcases is set to embrace the mystical and ambiguous just before Halloween by featuring local jazz groups Merman and Curtis Brink & The Drty Ten! Spine Showcases is a monthly concert series featuring the best contemporary jazz artists in Kansas City for free.  Curated by Kelley Gant, patrons can expect some of the freshest experiences that the Kansas City jazz scene has to offer. Featured groups for the next show on Thursday, October 24, 2019, will be Merman and Curtis Brink & The Drty Ten. For this show, Curtis will be playing with a ten-piece ensemble.

Merman is an electronic, indie-jazz duo comprised of keyboardist/singer-songwriter Alyssa Murray and guitarist Adam Schlozman. Fusing music with synchronized visuals, Merman captures the listener and brings them into a world of color and sound.

Curtis Brink spent too many years trying to sound like everyone else. He began to broaden his perspective and embrace his own style when Wycliffe Gordon told him, “If it sounds good to you, then play it.” But, he also believes that if people don’t enjoy what you’re playing, then maybe you should keep that shit to yourself. After earning a Masters degree from the Manhattan School of Music, Curtis performed extensively in the gritty, hip-hop infused “brass n beats” scene in NYC where he learned that how you say it is equally as important as what you say. 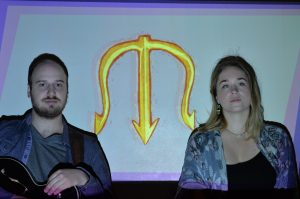