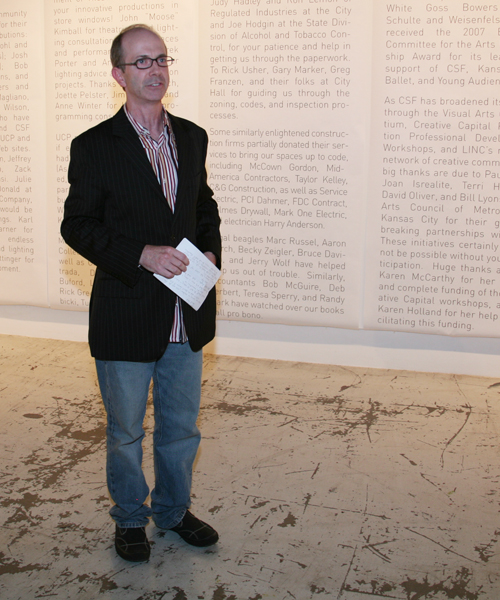 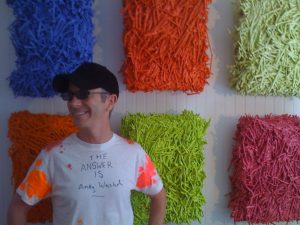 Charlotte Street Foundation announced today that Founder and Co-Director David Hughes will step down from his current position as Co-Director in mid-2013, following the hiring of a new Executive Director. Hughes will transition to the role of Director Emeritus, assisting in orientation of the new Executive Director, then continuing to serve as an ambassador and advocate for artists and the organization locally and nationally. Hughes founded Charlotte Street Foundation 15 years ago and his dedication to nurturing and advocating for individual artists has been catalytic for the growth of Kansas City’s grassroots artists community.

“I am tremendously proud of what Charlotte Street has accomplished on behalf of artists and the artists community over the past 15 years, due to the hard work and support of the many individuals who shared my vision” said Hughes. “On all levels, the organization is stronger than it has ever been. It feels like the right time to step back and make room for new leadership and the next phase of Charlotte Street’s evolution.”

Hughes, Co-Director Kate Hackman, and Charlotte Street’s Board of Directors formed a transition team to steer a national search for the new Executive Director.  “Throughout its history, Charlotte Street has remained nimble, inventive, and responsive to the real needs of artists,” said Hackman, who has been with the organization since 2004. “At this exciting time for Kansas City and our artists community, Charlotte Street’s opportunities for catalytic impact are greater than ever. I look forward to working with a new Executive Director, as well as our board and staff, to continue to drive programs that challenge, nurture, and empower artists, and fuel our community’s growth and dynamism.”

Since launching in 1997 as a fund to provide cash awards to Kansas City-based visual artists, Charlotte Street has grown exponentially to provide an array of artist-focused initiatives designed to simultaneously propel leading-edge artists and stoke collaboration, experimentation, and community-building. Programs include project grants, awards to generative performing artists, exhibition and performance programming, studio residencies, professional development training for artists, and more. In recognition of its impact on both artists and the broader community, the organization has received prestigious support and recognition including a Bank of America Neighborhood Excellence Community Builder’s Award and an Andy Warhol Foundation Initiative grant, among others.

About Charlotte Street Foundation
Charlotte Street – with its community of artists – strives to be a primary catalyst in making Kansas City a vibrant, creative metropolis, alive with collaboration, passion, ideas, and surprise. In 2012, the organization celebrates its 15th anniversary. Over 15 years, Charlotte Street Foundation has challenged, nurtured, and empowered thousands of artists, distributed over $775,000 in awards and grants to artists and their projects, connected individual artists to each other and to the greater Kansas City community, and built a national reputation as leading model for community impact through multi-faceted artist support.

Learn more about Charlotte Street’s Board of Directors, Staff Members, and Mission.