The Charlotte Street Foundation is excited to announce the seven artists who are selected to participate in an 18 month-long Neighborhood Artists Residency pilot program at 4001 Troost Avenue, starting in December 2017 and running through the end of May, 2019. Neighborhood Residency Coordinator, Selina ONeal, is excited about the next steps in the program, stating, “Charlotte Street Foundation continues to grow its mission of supporting artists in Kansas City by continually asking where their capacity to be effective is best manifested. This project is bold and challenging in its risk through inquiry, with questions and conversations about what the arts mean to our neighborhoods.”

This project seeks to support artists specifically interested in working at the intersection of art and community, facilitating creative dialogue with the communities that are invested in the many neighborhoods of the Troost Corridor. Artists will learn about current creative activities and initiatives in the area, in an exploration of mechanisms to further enhance or create new artistic opportunities in the area.

Training and guidance will be provided in part by the St. Louis Regional Art Center’s Community Arts Training Institute (CAT), in collaboration with the Bainbridge, Washington Center for the Study of Arts and Community (CSAC).

The anchor location, situated in the Historic Manheim Park Neighborhood, will serve as a collaborative studio/project planning space, as well as a neighborhood engagement center for community meals, speakers series, and creative programming.

Charlotte Street Foundation will be conducting experience and relevance evaluations throughout the program, and will engage in reflective assessment at the conclusion of the Residency. Seven residents were identified through an online call-for-entry application process, and selected by a jury comprised of five esteemed professionals from the Greater Kansas City Area sectors of arts and culture, education, and community activism. Those artists are Chavonna Adams, JT Daniels, Cynthia Hardeman, King Kihei, Alex Martinez, Jessica Rogers and Don Wilkison (m.o.i. aka The Minister of Information).

The Neighborhood Artists Residency pilot program is a partnership between Charlotte Street Foundation and the Office of Culture & Creative Services of the City of Kansas City, Missouri. The program is supported by a National Endowment for the Arts Our Town grant.

ABOUT THE NAR PARTICIPANTS 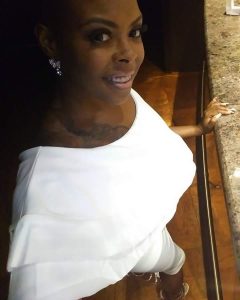 Chavonna is an African American woman who was born and raised in Kansas City, MO. She was raised by her grandmother during a time when crack cocaine flooded the streets and impacted black families across the nation. At the age of 4 years old, she began to use her art as a way to express her feelings, especially growing without a father.

Chavonna received her formal education in the Arts at Paseo Academy in Kansas City, MO. She also attended UMKC and KCAI. In 2014, she launched Created By Vonna, a company creating digital self-portraits, celebrity portraits, logos, t-shirt designs, and more.

Chavonna has been fortunate enough to use her gift to give back to kids that are growing up in the same kind of homes she did. In 2015, she teamed up with One Struggle KC, a community collaborative focused on educating Black and Brown children in the greater metropolitan area about social issues such as police brutality and mass incarceration. 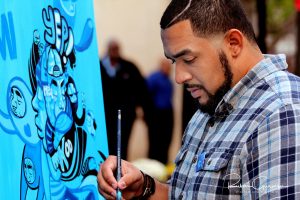 JT Daniels is a KC native whose passion for mural painting originated during his time spent as a youth development coordinator. Through combining art, mentorship & engagement, JT’s work has made room for him to share his artistic voice. His work depicts overlapping faces, words, and characters which are a visual reference of all the people he has talked to and shared spaces with over time. Some of these spaces include ARTSKC, LIVE KC, Urbana KC, Art in the Loop & The KC Streetcar. 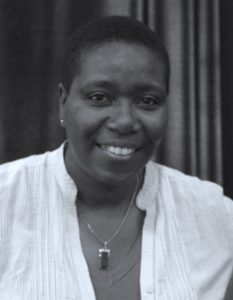 Cynthia is a Playwright and Program Director for Drama Time Children’s Theatre Program and Program Developer of R.I.S.E., an educational component to the Black Repertory Theatre of Kansas City’s Empowerment Program. A Parent Aide and Family Advocate for Trinity Group of KC, Cynthia works with parents of foster children on parenting and life development skills.

A 2013 graduate of The University of Missouri Kansas City with a BA in Spanish, Education and Theatre, her passion for theatre and gift of storytelling has become an illuminating path of truth and community building. Cynthia was a winner of Kansas City’s Project Playwright 2.0.

Her production of ‘Truth Stands’ in Chicago was a 2nd Place winner in Chicago’s A Taste of Theatre Festival in 2015. These last 2 years have been dedicated to providing children access to theatre through creating the Drama Time program and collaborating to develop community support for theatre and the arts. 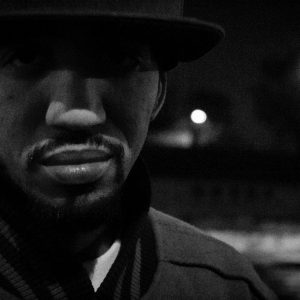 A community activist, education advocate, and artist, King Kihei (pronounced “king key-hey” and means, ‘God’s armor’) has garnered the reputation of having one of the most innovative minds within his community. King is of Hawaiian and African American descent, born in Honolulu, and raised in South Central Los Angeles and Kansas City. King Kihei has experienced many different walks of life which lends to his ability to draw from these influences in his music. He has defied the odds many times over, but namely as a cancer survivor.

As Charlotte Street Rocket Grant recipient for the project Parent Teacher Conference, King’s other recent awards include Missouri House Of Representatives Resolution for Philanthropy, and The U Church Community Changers Award. 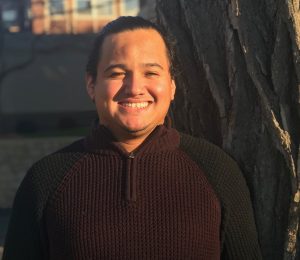 Alex was born in Veracruz, Mexico and migrated to the US at a young age as an undocumented and unaccompanied minor. He often writes about the trauma of this experience and other social issues that affect him and his community.

His piece “I Lived” will be in exhibit at Arte Latino Now 2018 in January, 2018. Alex’s poems have appeared in Semillas Publishing and Twilit Magazine’s social media accounts.

He is the Co-Chair of the Community Health Worker Forum at the Mid America Regional Council, and serves on the CHW Executive Committee. Most recently, ChapCARE.org named Alex a Hispanic Hero of Health during the 2017 Hispanic Heritage month.

Alex is an organizer for Brown Voices, Brown Pulse: a LGBTQ People of Color (POC) group working to create a safe and welcoming space for Queer Folk of Color in Kansas City. Alex is unapologetically brown, queer, and unafraid and his poetry reflects that. 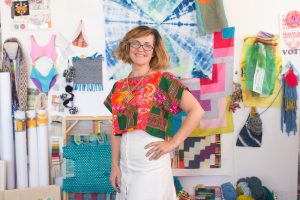 A native of South Florida, Jessica manipulates her education (BFA in Fibers from Savannah College of Art & Design) in traditional textile processes to create unique works of art, one of a kind garments, and handmade functional objects. Outside of her personal artwork, Jessica is a serial “community-preneuer” and she uses her background in the arts as a catalyst for connecting people and creating community.

She began CartWheel, a mobile retail and gallery space in 2010, and shortly after The Gypsy Market, a local artisan marketplace. She has contributed to many community driven projects and is very passionate about providing new experiences and opportunities for the Kansas City community.

Don Wilkison (m.o.i. aka The Minister of Information) 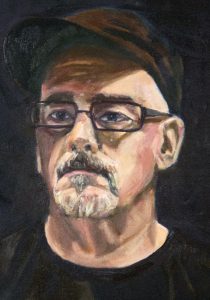 As much civil servant as artist, Don Wilkison’s work is informed by his scientist’s background. As m.o.i. aka The Minister of Information, he works in a variety of approaches and media, including collaborative public installations and interventions, experimental film, photography, print making, and sculpture. His civic engagements lie at the intersection of middle-class economics, progressive politics, and environmental science.

His work uncovers how human actions intersect with the world and the sins of middle-class America; he seeks to drive questions to the forefront. Why do we see ourselves outside of nature? Why do we permit endless corporate marketing, economic disparity, injustice, and intolerance? His work is created with multiple entry and exit points using methods that resist entrenched institutional and cultural indifference so that universal, contemporary issues can be probed, deconstructed, and reimagined in a more positive light.

m.o.i. was recently selected for the Spring 2018 Art in the Natural State at the Winthrop Rockefeller Institute. Working as a hydrologist for the US Geological Survey he spent more than a decade studying Kansas City’s urban water issues from a variety of scientific perspectives. An upcoming 2018 project will examine housing.

You can read more in the media release here.