Kansas City, MO, April 2, 2018: Charlotte Street Foundation is proud to partner with Fishtank Theatre for the regional premiere of Belfast Girls in La Esquina Gallery (1000 W 25th St. Kansas City, MO). The play is set to premiere on Friday, April 7 at 7 PM in La Esquina. Belfast Girls was written by Jaki McCarrick and the production will be showing from April 7 through April 29. Showings will take place on Wednesdays through Saturdays at 8 PM and on Sundays at 3 PM. Tickets are available for purchase.

A free, First Friday Meet and Greet will take place on Friday, April 6, 2018. The event is open to the public and people can enjoy free refreshments at La Esquina while meeting members of the cast and crew. 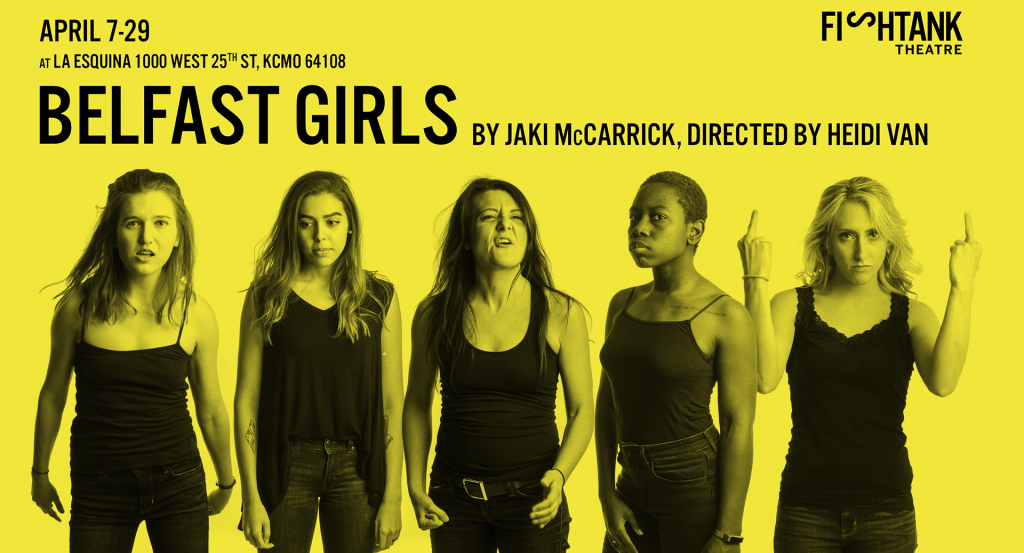 The production is directed by CSF Fellow Heidi Van and features a cast consisting of Rasheedat Badejo, Annie Kalahurka, Erdin Schultz-Bever, Lindsay Lillig, and Kaitlin Gould. Working with set designer, Mark Exline, Belfast Girls will be staged aboard a multi-level ghost ship, resembling a skeleton, and the skin and bones of the population a government let starve. La Esquina white box walls provide a projection surface for the voyage from Ireland to Australia where the set will be completed by images of the night sky, circling birds, the sea horizon, and, finally, the destination.

The Fishtank Theatre, founded in 2009, presents contemporary experimental live theatre that challenges the way theatre meets its audience. Material performed by the Fishtank is fresh, its content progressive and its writers and performers committed to the aesthetic of risk-taking.

Jaki McCarrick is an award-winning writer of plays, poetry and fiction. She won the 2010 Papatango New Writing Prize for her play Leopoldville, and her play Belfast Girls, developed at the National Theatre London, was shortlisted for the Susan Smith Blackburn Prize and the 2014 BBC Tony Doyle Award. Belfast Girls premiered in Chicago in May 2015 to much critical acclaim (Windy City Times Critics’ Pick) and opened this spring in Vancouver.

Jaki also won the 2010 Wasafiri prize for short fiction and followed this with the publication of her debut story collection, The Scattering, published by Seren Books. The book was shortlisted for the 2014 Edge Hill Prize. Winner of the inaugural John Lennon Poetry Competition, she has also had numerous poems published in literary journals including Ambit, Poetry Ireland Review, Irish Pages, Blackbox Manifold etc.

Recently longlisted for the inaugural Irish Fiction Laureate, Jaki is currently editing her first novel and a second collection of short stories called Night of the Frogs. Screenplay projects also include adaptations of her short story Hellebores and her first play, The Mushroom Pickers.

She has held numerous residencies including Writer-in-Residence at the Centre Culturel Irlandais in Paris & also regularly writes arts pieces for the Times Literary Supplement (TLS), The Irish Examiner and other publications. 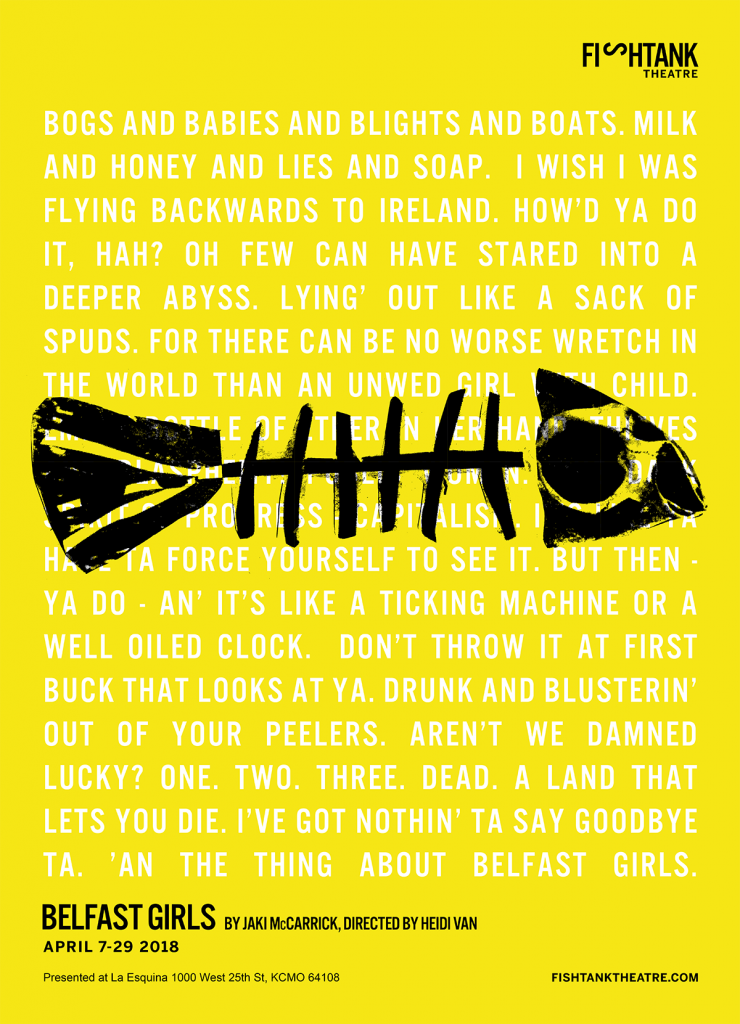 As Ireland crumbled with hunger, the British colonial administration in Australia needed labour to cultivate untended land, which would be razed unless workers could be supplied. Seeking hard working women, they appealed to the teeming Belfast workhouses, inducing applicants with comfortable passage across the sea and guaranteed work in the sunshine.

In contrast to the barren villages of famine-era Ireland, industrial Belfast experienced a frantic, pressured activity as people queued up seeking shipbuilding and linen work. But even as textiles and grain were exported, the number of workers outweighed the amount of labour.

Women in workhouses would be given token jobs like dying muslin to keep them from falling idle. But as more people arrived, workhouse conditions deteriorated further. ‘A lot of the work was made up work,’ says McCarrick. ‘And if they could get in, you’d have prostitutes in and out of the workhouses.’

So to qualify for Earl Grey’s scheme, an attractive escape route from the workhouses, women had to be aged 15-20 and have no living parents. They had to secure a certificate of good character from a local official or priest. But the rules were broken and the scheme was abused: ‘A lot of women would lie to get on the ship, and perform sexual favours to get their good reference. Which they did, plenty of them did.’

The story of the Irish orphan girls in Australia has been explored by academics and researchers including Trevor McClaughlin, author of the book Barefoot and Pregnant? Irish famine orphans in Australia. When McCarrick delved into the material she found detailed documents and registers for the women who left. But she also found evidence of a deliberate move by officials to purge the workhouses of prostitutes.

The quest of manifest destiny and seeking greener pastures is still a relevant narrative in contemporary society where class struggle still exists, resources are scant, and the sex trade industry is thriving. The struggle of the Irish girls of the 1850s are not far from struggles of American girls and women today.