KANSAS CITY, MO, December 10, 2018: Charlotte Street Foundation and Mobank are proud to announce the installation of the new Artboards from December 2018 through February 2019. The Artboards will rest in the heart of the Kansas City Crossroads District above Mobank at 125 Southwest Boulevard, Kansas City, Missouri. The two new artboards feature commissioned artwork from Bernadette Esperanza Torres and Jessica Kincaid, who were selected through a submission process last year in 2017. 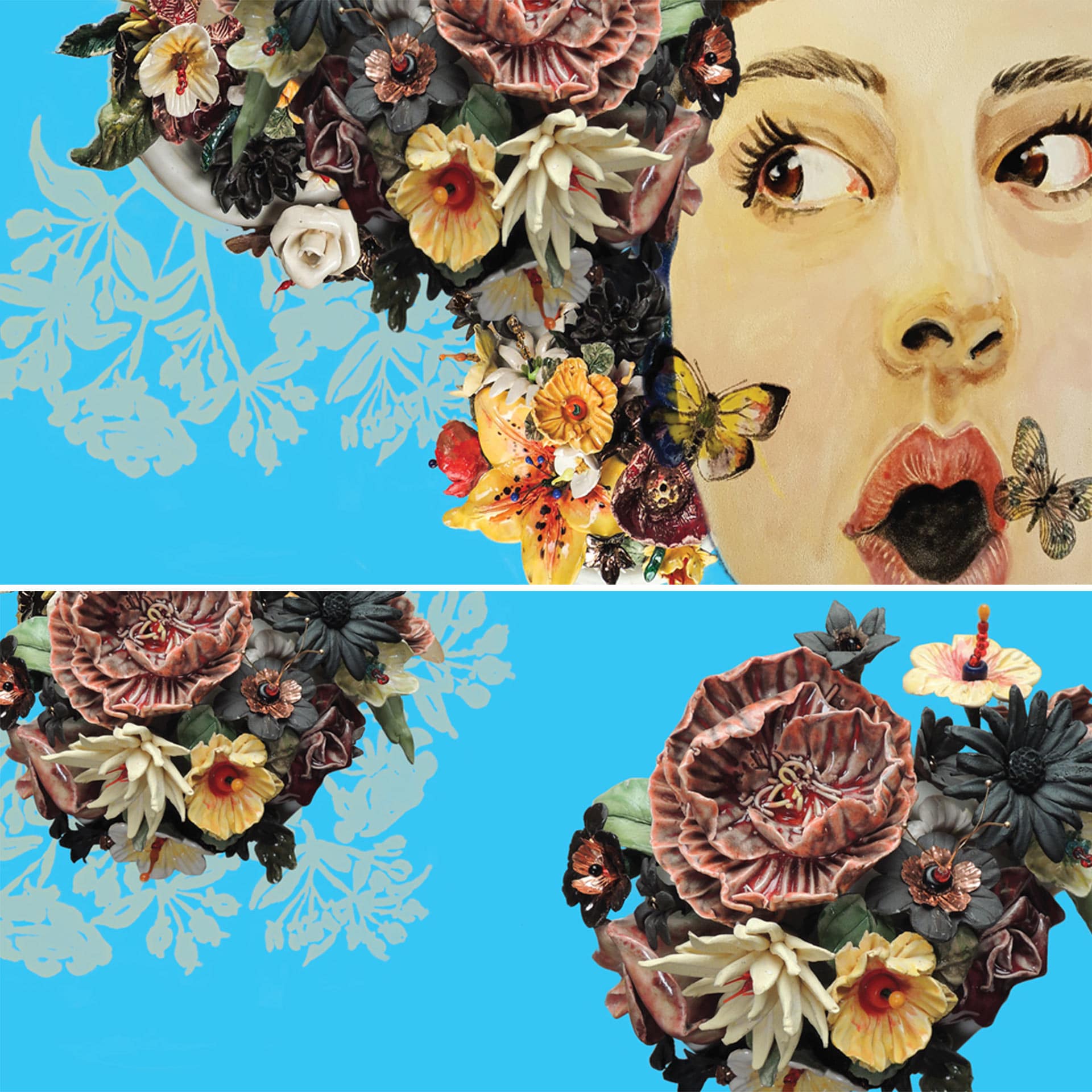 Bernadette Esperanza Torres is the daughter of a florist. Her work interweaves the flowers of her childhood with family relationships, self-sufficiency and joy. Bernadette makes narrative, life-size ceramic sculptures based on her life and the lives of women she has known. Flowers and finches decorate these female figures who all hint at some tragedy that brought them to this point. Bernadette seeks to let viewers see that beauty can arise from unpleasant situations -and, perhaps more importantly, that beauty on the outside can hide deep sorrows.

Bernadette began working in clay as a student at an experimental arts high school in St. Petersburg, Florida. She received her Bachelor of Fine Arts degree from the Kansas City Art Institute and her Master of Fine Arts degree from the University of Miami, Coral Gables. Since 2003, she’s been a full-time art professor at Penn Valley Community College, and director of its Carter Arts Center Gallery. She shows extensively in Kansas City, and is included in private and public collections across the country. Her work has been published in Ceramics Monthly (September 2015), Gallery of Kansas City Ceramics, 500 Figures in Clay #2 (2014), Ceramic Sculpture, Making Faces (2014), amongst others.

Bernadette’s Blooming Enchantment is the perfect antidote for a cold, dreary winter’s day. The images are inspired by the extravagantly vibrant gardens at The Palazzo, a Baroque summer palace on one of the Borromean Islands in northern Italy. Expect each blooming image on the billboard to one day be translated into a lively ceramic sculpture. 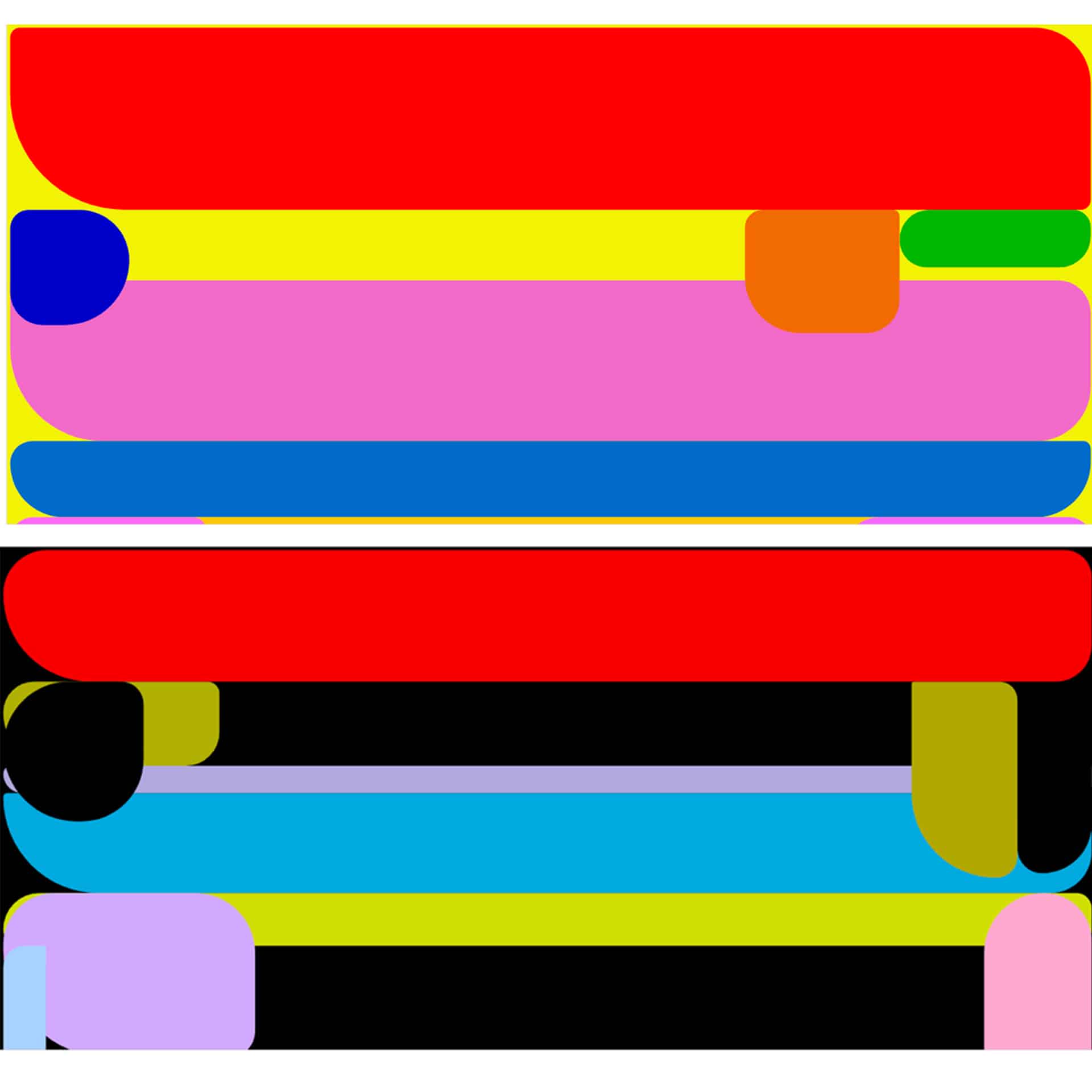 Jessica Kincaid creates translucent textiles with beads and thread, and most recently works on paper and digital prints generated in the process of learning web development. She was a 2007 Charlotte Street Foundation Visual Art Award recipient. She earned a BFA in Fiber from the Kansas City Art Institute (1992) and a MFA from Cranbrook Academy of Art in Bloomfield Hills, Michigan (1999). More recently, she earned a Certificate in Web Development from Johnson County Community College (2016). Her solo exhibitions include “The Beaded Image” at the Kansas City Public Library and “Habitations” at the Nerman Museum of Contemporary Art. More works may be found in the collections of the Nerman Museum of Contemporary Art and Emprise Bank, as well as numerous private collections.

In regards to her work, Jessica stated, “In 2014, I had an opportunity to explore a new way of perceiving the world when I began learning to write code for websites. This forced me to think more analytically, as when someone solves a problem in a more scientific discipline. I matched key words in the code with colored areas on the screen. When I tested my code, the shapes moved in relation to each other. Red shapes positioned themselves near the top of the screen, and the blue ones often deferred to the other shapes. I began to internalize the logic, while doodling with the code. This led to improvisational arrangements of abstract shapes with curved edges and variable proportions, in random shades of reds, blues, yellows, pastels and dark colors. Each Artboard is drawn with a piece of code and cast on a screen of the same proportions. As in many disciplines, writing code can be a creative activity. Is there something that you never thought you could do? Take a few risks and question the obvious in your routine. I envision that people will see the Artboards during their morning or evening commutes, thus the titles, ‘Day’ and ‘Night’. My wish is to inspire curiosity.”

ABOUT ARTBOARDS
The Missouri Bank ARTBOARDS were launched in fall 2008 when the Bank purchased the building that currently houses its Crossroads Branch and renovated and converted the building’s existing double-sided billboards into a highly visible site for work by area artists. The project was completed by Helix Architecture + Design. To date, commissions by approximately 58 Kansas City area artists have been featured on the ART- BOARDS. For a complete listing and more information, go to www.charlottestreet.org/opportunities/artboards

ABOUT CHARLOTTE STREET
Charlotte Street identifies the needs and fuels the evolution of an ever-changing multidisciplinary arts ecosystem, acting as its primary provocateur. Charlotte Street cultivates the contemporary, the exceptional, and the unexpected in the practice of artists working in and engaging with the Kansas City art community. Since 1997, Charlotte Street has distributed over $1.1 million in awards and grants to artists and their innovative projects, and connected individual artists to each other and to the greater Kansas City community. For more information about Charlotte Street, its awards, programs, and initiatives, visit www.charlottestreet.org.

Read this in a press release format here.