class=”BodyA” style=”margin-bottom: 0.0001pt; line-height: normal; text-align: left;” align=”center”>Opening Thursday, February 5, Wanting To Know But Not Wanting To Ask is an exhibition which posits that a sense of self is developed and communicated through what one owns and displays, be it objects or experiences. Artists Shelby Keierleber and Elizabeth Allen-Cannon explore how objects and personal relationships establish self-worth and distinguish us from others. If considered rare and worthy of others’ attention, the items each painter depicts (material or symbolic) become alternative forms of capital, securing one’s social status. Wanting To Know But Not Wanting To Ask features work which suggests that the struggle to represent one’s self as fulfilled, eclectic, and responsible often results in a trivialized compromised private self.

Details: Shelby Keierleber paints ‘coming-of-age culture’, and the enduring consumer search for what is new and timeless. Keierleber focuses specifically on ‘cult-objects’ of desire situated in show-rooms with only vague traces of human existence. These esoteric objects—perhaps a specialty chair design or a particular shade of Yves Saint Laurent foundation—although seemingly unique, are mass-produced and are subject to the same disposability as all passing trends.

Elizabeth Allen-Cannon paints conventional romantic poses and grooming rituals, yet her compositions are dark and elusive. Instead of a close-up cinematic kissing scene, the viewer is pushed away from the subject through a number of visual devices. Situated within a theatrical set, at a distance from a voyeuristic audience, the poses Allen-Cannon depicts lose their senses of both intimacy and sincerity. While her figures are positioned in a way that suggests feelings of self-worth and mutual affection, Allen-Cannon questions these sentiments by situating these private acts publicly.

Wanting To Know But Not Wanting To Ask is proudly presented by The Charlotte Street Foundation as a selected proposal from its Open Call for artist projects, held over the summer of 2014. 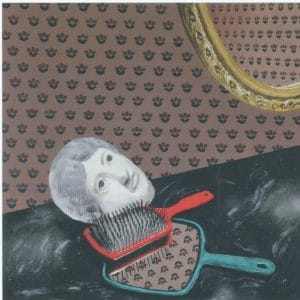 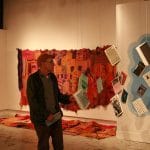 Loving After Lifetimes of All This 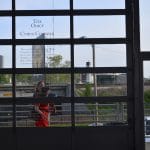